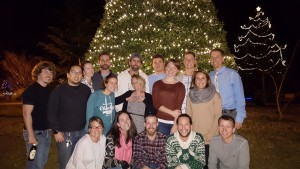 Had another fine Honey Badger Holiday Party this season. It was an excellent turnout, and a lot of fun.

It was held at my home for the second year in a row, and I was glad to at least have a couch this time around that they were able to sit on. I suppose I’m getting there slowly but surely.

Many brought amazing treats or beverages. It’s really great to see so many contribute even when we’re not playing a team sport. A pretty great bunch.

We picked teams (my partner was multi-defending champ Cait), and got started on some games.

After all that fun, we had our gift exchange. Jen provided all the rules, and the exchange began. All went well, everyone came away happy and it was a good time. I got some card based games.

In a surprise gesture, the team created an amazing Honey Badger card (it really is awesome), and were incredibly generous in giving me gift certificates to Home Depot, Wawa, and Amazon. I mean they were really generous. So very kind of them, again they are pretty great.

I then coaxed the team into having our photo taken in front of the Christmas tree at the arboretum. It’s a pretty scenic spot, and just a few steps from my home. Everyone was a good sport, and we got a pretty amazing Honey Badger photo.

We then returned to play some Marit Kart 8. People then began to slowly slip out as it was on a weeknight after all.

All in all I’d have to say it was another success!