Always was more of a Marvel guy than a DC guy growing up, but I can’t not check out a movie about a villain. The villains were always the coolest part of comics.

I read some pretty great reviews of Joker, so my expectations were pretty high going in. I have to say, it lived up to the hype. It’s not too often that a movie makes you think so much any more, but this one really did that for me.

It was darker and more disturbing than anything I’ve seen in a while. It really does a great job to get you inside the head of an unstable guy, or at least I though I was in his head most of the time. But frankly, by the end I’m not sure how much we were in his head or in reality. Well done.

Very well done. One of the more interesting movies I’ve seen in a while.

Growing up I was big into comics, especially the Marvel titles. My favorite comic was probably Infinity Gauntlet #4. That’s the issue, where the hero’s team up with Dr. Doom to lose in a fight with Thanos wielding the Infinity Gauntlet. My buddy Wes and I read and would draw pages from that comic on many occasions, it was great.

So when the Marvel movie machine started 11 years ago, I was excited but also skeptical. Up to that point, Hollywood always seemed to fine a way to ruin years and years of great comic stories and plots.

The 11 year run has been pretty great. I’ll never forget how excited I was when they revealed Thanos at the end of the Avengers film in the post credits. I instantly knew what was in store, just didn’t know how many films and years it would take to get to the end.

Avengers: Infinity War was pretty great. If focused on Thanos and ended with the snap. An iconic moment that any fan of the 90’s comics knew was inevitable.

The conclusion to 11 years of Avengers: Endgame was great. I had a couple of theories going for how it would turn out, and I have to admit they surprised me quite a bit. It made 3 hours and 1 minute go by in a breeze.

While the quality of the films and storytelling has been excellent and exceeding my expectations, I can never get over at how the films have gone so mainstream. Growing up, only a few of us were hooked on this amazing world.

Last night I couldn’t even begin to count how many people were there to share the end of this story. People of all different ages and backgrounds, sharing a common interest. It was pretty awesome to be a part of.

As a lifelong comic book nerd I have been looking forward to the release of The Avengers for quite some time. Add in the fact that the last Marvel backed films (Iron Man, Thor, Captain America, etc.) have all been great too, I really wanted to see all these great characters in one big film.

While not that big of a moviegoer, I was determined to see this on it’s opening night. Joining me on this would be the Shepherd and Dustin. We had to wait for the Shepherd to get off of work before we could go. He was expecting to work till 7 pm, maybe 8 at the latest.

Several phone calls later, the Shepherd would wind up getting off work around 10 pm. So that meant there was only 1 showing left in the area that we would still be able to attend. The 11 one in 3-D. None of us really like 3-D that much, but since it was our last option we didn’t have much of a choice.

The theatre wasn’t packed, but there was a good amount of people there for being so late. I thought the movie was excellent. There didn’t seem to be a wasted moment, or too much character explanation (I do get tired of always seeing the origin stories).

While a movie can never be exactly like the comics, it did a great job of appealing both to the comic fan and a casual viewer as well. There were also some genuinely funny moments in there as well. Very well done.

My favorite moment of the night was afterwards during the credits. Many movie goers had begun to leave as the credits began to roll. Any decent Marvel fan knows that spoilers are to follow after the main credits.

Well this one girl really seemed to take it upon herself to make sure that everyone in the theater was aware of upcoming spoilers. She continually shouted “Don’t leave, there’s more”, etc. Finally she stood up and motioned with her hands while shouting too. It was pretty amazing. You’d of thought she was trying to save their lives.

A guy dressed as Captain America was seated next to her, so I guess that kinda explains her behavior a bit better now that I look back.

All in all a very great comic book film and hope that they can keep up this great streak of solid comic adaptations. 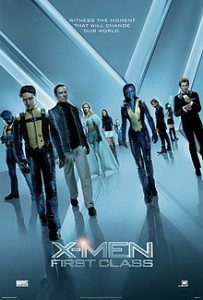 As a huge X-Men fan growing up, I had to make sure that I saw X-Men: First Class. I did enjoy the first two X-Men films (the third and Wolverine were complete poop), and was hoping that they could get that franchise back on track.

Having read up on the lineup and basic story online I knew that the movei wouldn’t be following the comics too closely. Since I had known this going in, it didn’t trouble me too much. Yes, I’m that comic book geek know knows when they change things up in movies (why do they have to always do that?)

If you can get past the inaccuracies it was a really good movie. I’m really glad to see another good comic book movie. The story, and characters were great. Taking place during the Cuban missile crisis was a great idea. They were able to work in the good and evil sides forming as well as the hatred that humans would have towards mutants regardless of which side they choose.

Young Magneto and Xavier were really well done. It was great to see their different paths and ideology as well as how they would get to each. My favorite part was Azazel wearing a captains hat while hijacking the Soviet ship. I’m not sure if that was done for humor, but I don’t know why he would need to dress up as a captain aboard a ship of dead people. Excellent movie, go see it.

I was very glad to see that Thor was well done and definitely got my approval of a good film adaptation of one of the cooler comic book characters. While the story was altered a little bit for the film, it wasn’t anything too major (Jane Foster is and astrophysicist not a nurse, etc.). 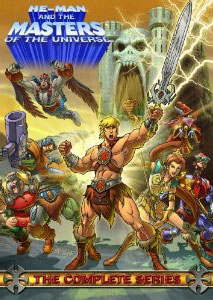