IÂ needed to sign up for Internet and perhaps some Cable TV services, so I contacted Comcast Xfinity. A sales person helped me select a reasonable package for my needs. They had a decent package for new customers that included Interent and basic cable with HBO included for a year.

I had specifically asked the sales rep if it included HD channels probably 5-6 times. He confirmed that it did all 5-6 times. I agreed and a self-install kit was shipped to my home.

When this magical kit had arrived I began the set up and activation process. Though I had requested just a modem with no router built in, they did ship me a modem/router combo. I really prefer to use my Apple Time Capsule for my routing needs, so I’m still working on getting around their setup. Haven’t seen a way to disable their router just yet.

Activating the Internet tookÂ close to an hour on the phone with someone with a very heavy accent and poor grasp of the English language. While she was polite, the language barrier did make the task a lot more difficult than it probably should have been. It took them numerous attempts and resets to get it working, but after an hour I did have Internet. Yay.

Cable TV was a bit more of a mess. Despite me asking and the sales rep confirming multiple times that I was getting an HD box, I had received an old analog box. Which of course took another hour or so on the phone to get activated. The tech support really didn’t seem to have any idea of what they were doing.

So after work the next day I headed their on my way home. Much to my surprise the Comcast Service Center has not been in Northfield for quite some time. This was pretty frustrating, and it was too late to go to any other one’s at this time. I’m still a bit puzzled as to how they got that one wrong, you’d think they just had to read off a location from a computer.

So the next day after work I went to the Comcast Service Center in Absecon. There were probably 20 or so angry people in line when I arrived. These people were miserable and it was a fairly uncomfortable situation. I work hard so that I can afford to not be around such unhappy folk, but every now and then find myself amongst them. I can’t imagine being that unhappy and spending that much on their monthly bill if they are as broke as they proclaimed. Read a book, get outside or do something else instead of watching hundreds of channels!

So, I waited to exchange my cable box for well over an hour. When I finally did get help, the woman at the center was extremely helpful. She did her best to fix my account and also went out of her way to see if she could find me a better deal. She was really great and the only positive experience I had with Comcast to date.

I did learn that HD was not included in the package and would cost more. I’m still bummed that the sales rep misinformed me regarding this, but it was still a reasonable deal for me with the added expense.

When I got home with the new cable box I had to have it activated. This took at least 45 minutes on the phone to get done. For reasons unknown to me, they had to continually reset and reattempt to get my service activated. It was a real pain, and I was more than tired of dealing with Comcast at this point.

All said and done I do believe I have spent over 6 hours dealing with Comcast just to become a new customer. I’d say that was quite unsuccessful and I can’t imagine I’m much of a long term customer with them. Very, very poor customer service and I’m not one who typically complains much.

I’m not sure what led me to visit Twitter the other morning, I hadn’t really forÂ well over a year. Not sure if I had some weird dream,Â but something told me to just visit and check in and see if all was well. Much to my utter shock I learned that Logan the Wolverine had passed away last month.

My stomach had completely dropped and I had to read and refresh the screen several times, each hoping that it was somehow an error or I had just read it incorrectly. He was such a nice dog, and not nearly old enough to leave this world. Even though I hadn’t seen him in a very long time, I was still deeply saddened to learn of his passing.

IÂ do consider myselfÂ very fortunate to of been able to meet and spend a great deal of time with such a fine dog. He really was great in so many ways, and as sad as I am, I do know that he was alway given the highest treatment a dog could have ever asked for. He was as loved as a stinky, grumpy, loyal dog could have ever been, and truly had been given such a great life.

I have so many excellent memories of him:

He truly was a great guy and am so sad that he is gone. I’m so very glad I got to know him and know that while his life was much, much too short he didÂ really luck out with the amazing life that he wound up with. He will truly be missed, but never forgotten.

While Christmas isn’t nearly what it was to me growing up, it’s still a pretty fun time of year. While the presents received doesn’t live up to the days of old, getting people really cool and thoughtful stuff is a lot of fun to me.

Apparently I really hit a home run with the Marvel Unlimited subscription I got my younger brother. He now has one year unlimited access to over 13,000+ issues of Marvel comics on his iPad. While I knew he would appreciate this a great deal, I was surprised at just how excited he was to receive it.

I did notice my Dad complaining to my Mom a few weeks back that these things he uses on the stove burners were well past broken. My Mom thought that the things were no longer made, as she hasn’t seen them in ages. Using the power of the internet I found out that they were called heat diffusers and in fact can still be bought. God bless the internet and a very glad father.

As for my older brother, he tends to be a really worrisome about his dog (Lady) when he has to leave her at home alone. So I got him a Belkin NetCam HD that he can setup wirelessly at home and check in on Lady when he is at work in full HD from his iPad (or any internet connected device). I was glad to be able to put him at ease and he was very thankful for the gift.

While my Mom’s wasn’t quite as exciting to me to think of, I did get her a fine gift card to Macy’s so she can go out and spend a day shopping and frankly getting away from the above mentioned guys in my family for a bit of sanity. She really likes to do that, and giving her a gift card to use up means that she will surely put aside time for a day to get away from those guys.

All in all a pretty successful gift giving for my family.

I was also the recipient of some cool stuff from them too:

While not at fun as it was many years ago, still a pretty cool time and nice to be around everyone in relative peace. 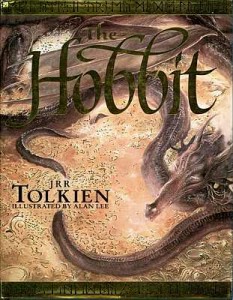 With The Hobbit film coming out in a few months (I think), I figured now would be a good time to read it. My brothers and I used to love to watch the cartoon movie of it. To this day, the goblin song might still be my favorite song of all time. Plus the whole thing,Â especiallyÂ Gollum scared me like few things in life ever did.

The book was pretty good, luckily I’d forgotten enough since I was a kid that not everything was predictable. For some reason I expected it to be less kiddie as I began reading, but it was written for children after all, so I don’t know how I got that expectation.

I’d say that this did hold up to my lofty childhood expectations. I found myself rooting for that little hobbit on his epic journey.

Glad I gave this one a shot, now I have the goblin song stuck in my head again.

Finally found some electricity at work today, so I figured I’d jot down some of my highlights from the most craziest storm I’ve been witnessed.

While the storm only lasted about 45 minutes or so on Friday night, the insane wind gusts sure left their mark. I knew that I’d wake up to some decent amount of damage in the neighborhood, but nothing near what took place around Linwood.

Massive oaks that I thought were unmovable were lifted taking up chunks of sidewalks with them. I honestly felt that the Hulk would’ve broken a sweat attempting to lift many of these ancient oaks. I still can’t believe how many had gotten torn up or broken.

Sadly what would break their fall in most cases were power lines. So there were many downed power lines throughout. In fact as of right now there’s still no power in Linwood and it isn’t expect back on until July 6th. Hopefully it comes back much sooner if possible.

I was without cell service for a while too. On my quest to get a car charger for my phone I wound up at a Radio Shack. I hate Radio Shack. The salesman was pretty insistant on selling me insurance on my $30 purchase. Why would I spend $11 to insure something that was $30? With all the craziness about, I think Radio Shack may’ve been the zaniest experience I had.

Not having power hasn’t been that bad though. In a weird way it’s a bit refreshing to be without it. I feel a bit less lazy since I’m not sitting around as much. Though air conditioning is quite nice to have especially when you’ve been outside moving trees and other storm clean up stuff.

This was the most damage I’ve seen in the area ever. Still a bit amazed at all the trees that came down, many of them will be sadly missed.

I assist at work with handling our social media presences. Of which we do get the occasional upset and or nasty comment. Today I do believe I just coined the Triple AAA Approach to handling negative social media postings.