I assist at work with handling our social media presences. Of which we do get the occasional upset and or nasty comment. Today I do believe I just coined the Triple AAA Approach to handling negative social media postings.

That’s it for my Triple AAA Approach to social media customer service.
Comments (0)

I always hear much debate over the flaws of the US Healthcare Industry. Well today, I experienced just how awesome it can be.

I’ve unfortunately been sick, very sick for a very long time. For a week or so I was being falsely treated for strep throat. Not exactly sure when it started, I’m kinda old fashioned and if something hurts you just work through it, so there’s really no telling when this all began.

However, today I experienced just how amazing the system can be. Behold what was done in a single day:

For a total of $49 and never having to drive more than 7 minutes for any location (that’s with summer traffic mind you), I was able to get incredible health service today! I was so very impressed and so very glad to have solid health insurance as well. 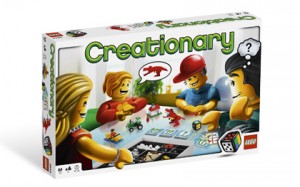 I had to exchange a birthday gift this week and decided to use my newly found store credit on the Creationary Lego board game. I’ve always been a big fan of Legos, in fact my dream job as a child growing up was to be a Lego designer.

Apparently Lego has a full line of board games now, but Creationary was the one that really caught my eye. It’s like Pictionary but instead of drawing the things to guess, you build them with Lego bricks. A simple, yet brilliant concept.

You also know something is good when you can get people who’d never participate in a board game to play it too. Some of the cards are pretty challenging actually, but there’s 3 levels of difficulty that you can choose which helps even things out amongst different skilled players/teams.

I’m very pleased with this fine purchase and have to highly recommend this as a fine game to play with a group of people. Plus you get to build with Legos which is always a good thing.

Friday was my birthday and I just wanted to point out and thank all the people who were kind enough to make it such a fine day. Actually I pretty much could change my birthday into birthday week the way ti’s turned out.

Monday started off with a surprise Grow! Nyokki! Monkey on my desk. It’s really awesome and I can’t wait to grow it by my window. It’s so very cool.

I also got some Dwight Schrute stationary so that I can easily keep track of time wasters, excuses and complaints. It’s pretty funny stuff. It came with an The Office notebook and some of the heaviest crayola pens I’ve ever picked up. They’re seriously heavy.

Lunch Club got me a Star Wars Science Dagobah Frog Habitat. It’s amazing, it’s a scene of Dagoba with Yoda and you grow tadpoles into frogs with it. I can’t wait to start! I have to order the tadpoles in the mail, so will have to exercise great patience (like Yoda would want) in waiting for their arrival. They also gave me a really cool Yoda card too.

I also got a super fancy wallet, which was really thoughtful. It smells all new and leathery and I’m still trying to figure out just how a wallet works. Apparently it’s not meant to be kept in a front pocket, but wouldn’t that mean that I have to sit on it? Wouldn’t that feel weird? Either way I’m going to try and convert over to using a wallet and will have to see how that goes. The wallet also came with a little monkey who’s currently hanging out on the shifter in my car.

My department got me some really funny gifts. A card that they modified and added so many great inside joke signatures to. They even found some long lost haiku that were written about me! Very clever guys, I’m still impressed. They were authentically wrinkled as well with stick drawings. I also was lucky enough to get a custom Nomenclature t-shirt as well. It’s very cool, and I will be most very proud to wear it. The cake they treated me to was super yummy and delicious. I’m not sure what exact kind it was, but was certain that it was good.

Then my parent got me a cake and made me dinner, which was good. Honestly I was too filled from a weeks worth of treats to eat much. The cake was a carrot cake from Bake Works, they’re the finest cake in the land. My mom got me some clothes which was good. I kinda was due for some new stuff, and since she had the person working in the store pick everything out I will probably wear the stuff.

My older brother got me a assortment of stuff too. A Link wall decal, a wiffle ball bat, a growing unicorn, and a DVD of some cartoons. I even also got some ninja star tacks for my office walls.

All that and my phone buzzing all day with birthday texts and facebook postings/comments made for a very excellent birthday. Thanks so much to all!

Sadly my grandmother passed away on Sunday morning. She was the best grandmother to my brothers and we’ll miss her very very much. What I’ll remember most about her is the fun we had when she would baby sit us when we were little.

Growing up my brothers and I had a number of baby sitters who refused to babysit again (looking back there should be no shame for not returning), but she always seemed to have such a good time with us. Whether it was the time we destroyed the kitchen trying to make cupcakes, or tying her to the couch when she dozed off for just a few minutes, to flooding the bathroom floor just for fun that she would later slip on (so sorry for that one mom-mom), she would never got angry at us or tell our parents how bad we behaved on that given night.

Wow, actually now that I’m writing this I’m remembering so much more good stuff we did with her. She was cool enough to play with us and our Star Wars and G.I. Joe toys. How many grandmoms knew how cool Boba Fet was? She’d take us to the mall all the time, to Collector’s Cabin to buy Jose Canseco rookie cards, read nursery rhymes to us from the ancient book nursery rhyme book we had, and look for gold bug hidden in the other book too (gold bug was like Waldo, but a golden bug). Oh, and also sewing on strawberry cartons or paper plates (sounds weird, but it was fun stuff).

And she and my grandfather bought me the Mac LC which was the coolest gift that I’ve ever gotten to this day. Probably the biggest reason why I do what I do for a living today.

We really had a lot of good times with her and that will certainly be missed, but not forgotten. Oh and her apple tarts that she would always bake for us were awesome too. 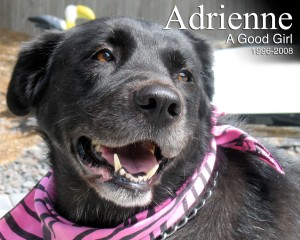 Sadly Adrienne passed away today.  She was a one of the kindest dogs I’ve ever had the pleasure of knowing.  I can’t sum her up better than just the fact the she was a good dog.  Extremely friendly, gentle, obedient, and just one of the sweetest dogs.

She was twelve years old and had some gray hairs to show for it, but her passing came rather unexpected today.  She will truly be missed by myself and all those who were so very fortunate to of met her.